Happily for all humanity Stephen ( Steven ) Peppiatt is dead , the Tring Troll is no more

Message received from his Toady the Squire

Thank You very much for Your message . I am sorry to have to tell You that 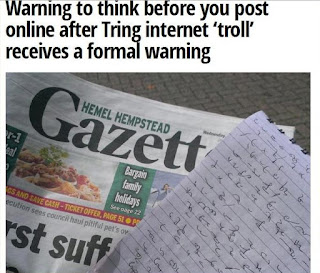 Police have warned of the dangers of posting online abuse after Stephen Peppiatt the  internet troll from Tring was issued with a formal warning.

Stephen Peppiatt  was  issued with a harassment order after conducting a lengthy campaign abusing members of a phonograph and gramophone appreciation society.
One victim told the Gazette that posts over a three year period accused members of the society of everything from rigging auctions to sex crimes.
The victim said: “What started as snipes turned increasingly nasty.”
The issue of online abuse through social networking sites has been hitting the headlines in recent weeks after high-profile cases involving threats against women and the death of a 14-year-old girl said to have been bullied online by other teenagers.
Police spokesman Sarah Spence said this week: “This sort of crime would fall under the Malicious Communications Act.
“Any person who sends to another person electronic communication which conveys a message which is indecent or grossly offensive, a threat, or information which is known or believed to be false by the sender, is guilty of an offence, if his purpose in sending it is that it should cause distress or anxiety to the recipient or to any other person.”
Some of the more offensive posts have now been deleted, and the society has been encouraged to seek civil advice on how to counteract the remaining defamatory comments

More and More lies from Peppiatt !

Peppiatt accused Soundgen of selling stolen property from the Estate of Fred Smith , Soundgen has not , would not and has never has sold any stolen items !

The true story of Fred Smith’s gramophone collection including the Rare Royal bow fronted trial 203 is quite sad as he was once friendly with his next door neighbour . Fred had no relatives and made a will leaving his house and contents to this neighbour .  Fred eventually fell out with the neighbour and intended to change his will and leave the collection to a Kent collector . Tragically he died while washing his car . The neighbour sold the collection the same weekend to a Japanese dealer .

A further irony was that a friend of Fred’s  Wayne Nettleingham had his collection of HMV coloured portables stored at Fred’s  , these went to Japan as well .


An auction house Steven Peppiatt couldn’t visit because he was  banned was his local Tring Auction , he was banned for stealing soundboxes from gramophones in the saleroom !

He always  rubbished this auction as there was nothing he would want to add to his extensive collection of gramophones safely stored in Peppiatt  Towers , Oxford . Or if there was  he would get one of his puppy dogs to go and buy the EMG for him , FAT chance

Peppiatt always went on and on about his ancient lineage , his extremely rich aristocratic grandfather of “ feelthy jazz “ fame . This Grandfather paid for him to go to Berkhampstead Grammar School and promised him he would inherit all ! Hence his logos on Ebay and other sites peppinheristall , Young Lowther , EMG colonel ,and stranded French aristocrat . All conducted at his fake Tring , Twin Towers and now Oxford mega property fakes !

If you had ever met his parents you will have known that his mother and aunt were a bit like Elsie and Doris Waters and his father was a chippy , not a lot of aristocratic blood there ! But perhaps this was all true and not a fantasy ? But Peppiatt  never replied to anyone  with full details of his wonderful lineage .

Peppatts lies were always Big lies , he is the Goebbels of gramophone collecting , the bigger the lie…….

He quoted this regarding his teak fake colonial gramophones and although doesn’t mention a name implicated another  dealer through his other insidious posts, unfortunately his gramophone forum posts of this time are no longer available unless saved by someone

Mr Pepppiatt  bought a large quantity of teak board in order to make HMV 101 and 102 tropical gramophones , so beware if you buy a tropical from unclemonkey on Ebay http://myworld.ebay.co.uk/uncle-monkey/ make sure the transfer is present and correct .

He was a humbug and full of it or should that be sh-t !


The Truth is often difficult to understand particularly if you were a total lying fantasist like Peppiatt
One can die washing ones car as poor Fred Smith did !
http://gramophonecollecting.myfastforum.org/about1818.html&highlight=mike+child

Paranoia Rules
http://gramophonecollecting.myfastforum.org/Fake_quot_Colonial_quot_Crapophones_for_sale_about1825.html
The earlier post regarding Peppiatt purchasing Teak has been removed for some reason , but Peppiatt was the Teak purchaser to make Colonial repros !ASK TERRIER !

Fact
The “Royal “ gramophone in Japan was purchased legally from Fred Smith’s estate ( see earlier post ) . Interestingly the “Royal “ tag came from Fred , Fred purchased the Gramophone from the son of the managing director of HMV , it was one of two made and the son said it was a prototype fro a gramophone made and presented to King George the Vth , Fred had a letter from the son stating this ,
It was also lucky that the gramophone survived , Fred purchased it from an advert in LOOT for the princely sum of £15 ! He arranged to collect and pay , but was delayed in getting to Hayes to collect it , he arrived to find the son had loaded it onto a trailer and was going to take it to the local tip thinking Fred wasn‘t coming . Saved in the nick of time !,
And now read the fictional fantasy of a deranged mind
http://gramophonecollecting.myfastforum.org/Was_fred_Smith_s_Collection_Stolen__about1799.html
http://gramophonecollecting.myfastforum.org/The_quot_True_quot_Story_of_Fred_Smiths_Collection_sale__about1819.html

More and More lies from Peppiatt !
Soundgen has not , would not and never has sold any stolen items !
The true story of Fred Smith’s gramophone collection including the bow fronted 203 ( which LIAR Peppiatt knew full well ) is quite sad as he was once friendly with his next door neighbour . Fred had no relatives and made a will leaving his house and contents to this neighbour . Fred eventually fell out with the neighbour and intended to change his will and leave the collection to a Kent collector . Tragically he died while washing his car . The neighbour sold the collection the same weekend to a Japanese dealer .
A further irony was that a friend of Fred’s Wayne Nettleingham had his collection of HMV coloured portables stored at Fred’s , these went to Japan as well .
I am sure Wayne Nettleingham who is a member of Peppiatts forum will confirm this although if he does Peppiatt will delete the remarks
The sadest part of Pep*iatt’s rantings are that he gets people such as Nigel Phillips ( The Squire ) to endorse his nonsense

Peppiatt was the fantasist property seller and buyer Peppiatt lived in one room of his parents council house . He  always maintained that this was because of housing problems with his vast property empire . Prior to 2001 he always said he had a large Georgian property in Tring with extensive grounds and barns on adjacent property . He would regale listeners with stories of how he would hide from Kenny Fry when he called in an old cupboard until he went away . It is surprising then that Kenny Fry has no recollection of this property and says he has only known Peppiatt living with his parents ! Peppiatt said during 2001 that he was living with his parents in the house that he owned , as his Georgian house had been seriously flooded and he couldn’t live in it and the Insurance company was reluctant to pay for the damage as it would cost £50K Anyway the Insurance company finally agreed to pay and the extensive refurbishment took place , he was all set to move back in . The next door neighbour decided he wanted to buy the Tring property , but this was declined . At last the neighbour offered £350,000 , a huge sum that Peppiatt couldn’t refuse ! So was he flush with money after the sale and purchasing new properties ? No he was still living with his parents ! Oh then tragedy ! He was advised to send the money to the USA by his financial advisor , which he promptly did . So why no readies after this ? Well it transpired that the money was electronically mailed to the USA to a bank in the Twin Towers . Yes the Twin towers and the day after the transfer the terrorist attack took place ! Oh dear ! All of Peppiatts assets disappeared in the meltdown all the records of the transaction too ! He lost the lot ! He still lives with his parents in the council house , which he claims he owns and that they live with him . Now the fantasy has returned with the purchase of a very large property in Oxford , it has tenants in the bottom , but a large attic flat that he is renovating to live in , this will take years and years . No doubt he has now got a flat in the Shard !

Peppiatt what did he do all day ! Peppiatt lived in one room in his parents council house . he sat in his bedroom playing with what ? and 78s and recording them for Youtube , what a pathetic man he was